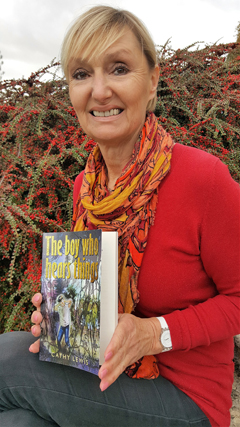 When Jamie Grey and his friends sit outside Queen’s House to tell ghost stories, it’s all a big joke. Until Jamie hears footsteps and a strange, eerie whistling.

Jamie discovers the building was once a hospital for injured soldiers, and it’s soon going to be rebuilt as posh flats. From then on, he’s haunted. By stories of bad things that happened there. By the hunched figure that appears in the trees whenever he goes near. And by the whistling tune he can’t get out of his head.

Jamie doesn’t know what’s going on. But there’s one thing he’s sure of – the place has a terrible secret which some people are determined to hide.

Can Jamie find the truth about Queen’s House before the bulldozers move in…?

Title: The Boy Who Hears Things

For news about forthcoming book signings, please email me