You are here: Home › Uncategorized › We’ve got Broadchurch mapped!
By Cathy Lewis on July 30, 2013 in Uncategorized 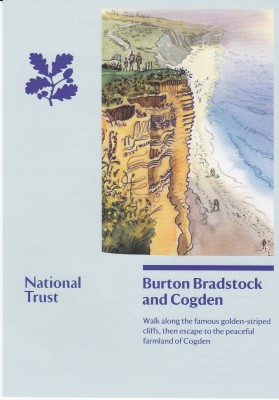 I’m sure that many of you watched the recent ITV drama Broadchurch. As soon as it started, I recognised the golden-stripes of Burton Cliff on the Dorset coast. I’ve been lucky enough to work along this fantastic coastline on many projects for the National Trust and Dorset AONB.

I first explored ‘Broadchurch’, well, Burton Bradstock to use its proper name, with illustrator, Tony Kerins. We were mapping one of the routes in the National Trust’s publication ‘Circular Walks along the Jurassic Coast’. The walk is an hour’s stroll along Burton Cliff – the very cliff that the cameras lingered on for so long during Broadchurch.

The drama is already bringing many visitors to the area, much needed in this economic climate. And there’s talk of Broadchurch being shown in America, so maybe hoards of overseas visitors will come too. They won’t be disappointed – it’s a breathtakingly beautiful place.